GET ON THE TROUT

Over here in the UK, freshwater wise, there are three main targets for the predator angler; pike, perch and zander. For those with the inclination, know-how and, usually most importantly, a sense of adventure, chub are also a more than viable predatory target, but, unless you venture in saltier territory, there’s not much else going on… or at least that’s what most of us think.

For me, one of the more exciting species to target and one that doesn’t even enter as a blip on most lure anglers’ radar, is the trout. Fast, aggressive and more than willing to smash lures, these salmonids are a brilliant fish to get stuck into. Ok ok, it’s not the most fashionable of species. If you’re after rainbows then you’re looking at stocked fish on the fluff-chucking equivalent of a commercial carp waters with about as much romance as a wet weekend city break in Croydon… on your own… in January… But, that doesn’t mean it can’t be great sport and also put your angling skills to the test.

My dad hasn’t fished with lures for years. The last time I took him was a decade ago on the Somerset levels after pike, where after catching one jack he took a dislike to the rows of sharp teeth and started playing golf… his loss. So, when he suggested going lure fishing again recently, I thought trout would be the perfect foray (sans teeth) back into things. There was also the added bonus of getting out on a boat – always a great adventure for novice anglers – and the fact that he could feel all hunter gatherer by taking a few home for the oven.

We hit the reservoir early, willing our boat along (the asthmatic outboard sounded and felt like it needed a service or at least a refill of its inhaler) as we headed for the damn end of the body of water where the wind was push. The thinking process here, as with any kind of lure fishing, was that the wind would push the insect life and food to the area, bringing in the trout.

The weather plays a big part with these fish. They don’t like the heat, disappearing down to the depths when it’s too hot and bright, but, with a bit of cloud cover we were hopeful they would be up and feeding along the dam wall.

Now, with trout you have two ways of catching them. Either they’re fry feeding and switched on to prey fish which you can mimic and get them to hit your lure as a result. Or, you can basically just put something flashy past them that grabs their attention or pisses them off so that they strike.

Flashy then is good when it comes to trout, and there’s a reason that the fish tends to be synonymous, lure wise, with spinners. For that reason I set my dad up with a Rage spinner, getting him to work the lure at different speeds in order for it to run through at varying depths. We had already seen a few fish moving on the surface, meaning we should find them in the upper layers, we just needed to work out at which level they were sitting.

Importantly I clipped him on a French bladed spinner as this can be worked slower while still getting the movement you need compared to the willow blade style of lure. Silver was the obvious colour to start with in a 3.6gram weight.

I went straight in for a hard lure, specifically a sinking, 2.5cm Salmo Hornet. These have a great, tight wobbling action and as they sink, you can count them down to cover the water column.

Because of the size of the lures we were casting about the right, balanced gear was needed, not only to give us control and be able to whip the lures out, but also to actually enjoy the fishing. As a result we used Rage Terminator Pro Twitch and Jig rods with casting weights of 3 -14grams coupled with 1000 size Prism reels and 0.10mm Prism braid. Fluorocarbon leaders were also used (Rage Drop ‘N’ Jig in 5lb 11oz breaking strain), especially as the water was crystal clear. 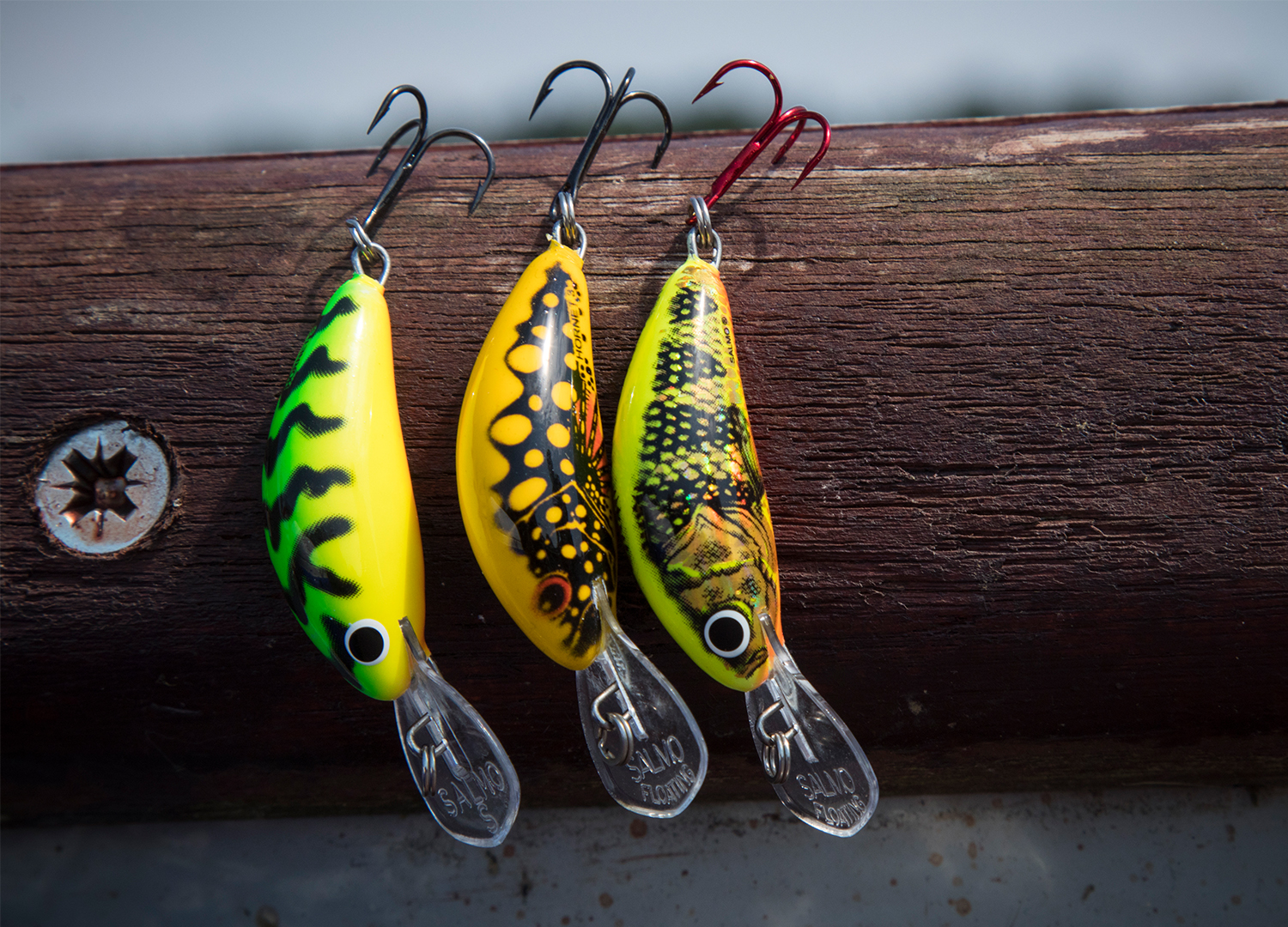 Setting the boat up on a drift that took us parallel to the dam wall (there was a light breeze to carry us over the surface), some 50 feet out so we could target the deeper water one side and up to a large weed bed on the other, we began casting, systematic covering water and depths.  After an hour and halfway through our second drift a shout went up from the other end of the boat as dad was getting very animated playing a fish that launched from the water in front of him in an even more animated action. 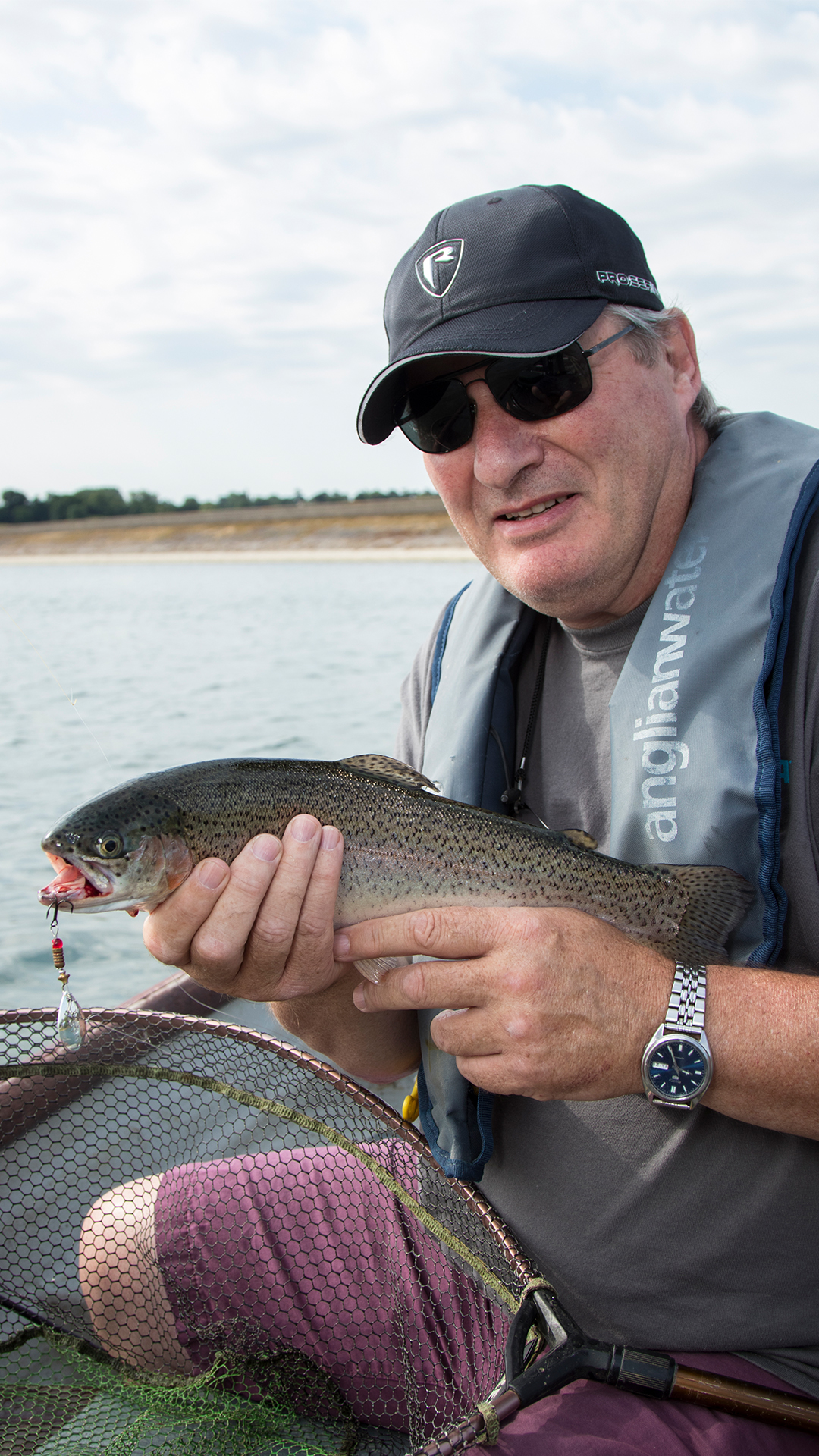 Netted, on the boat and photographed it’s the happiest I’ve been to see a fish in a long time. Not because of any other reason that my old man caught it. I’ll be honest and say that I can be a jealous angler, to be fair on myself I might change that to highly competitive, if someone else is catching, being happy for them tends to be the last thing on my mind, that feeling drowned out by my need to catch more or bigger or both… But not in this case. I was smiling more than he was, and was just so chuffed he’d caught and before me too. 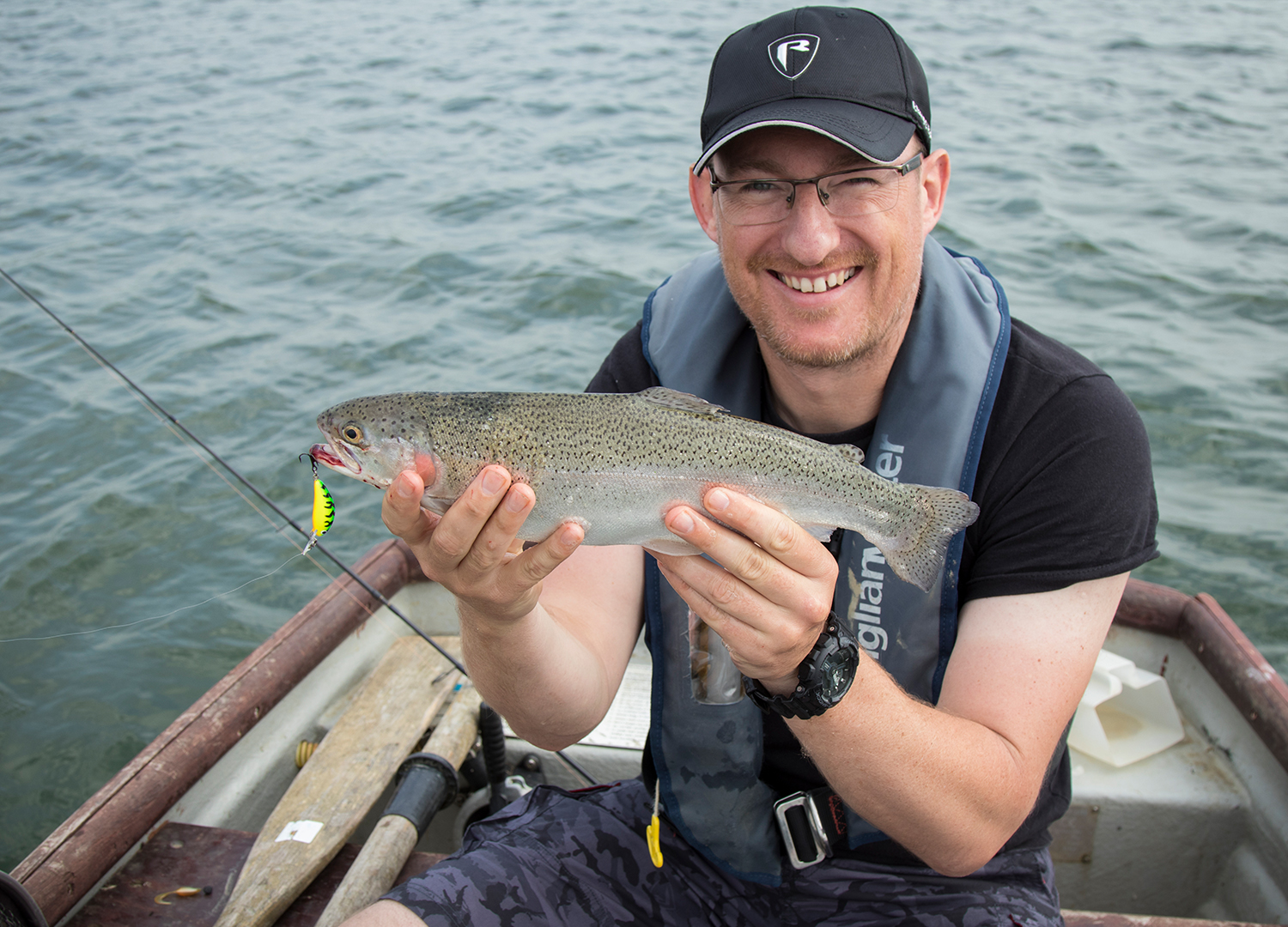 It wasn’t long before I was in through, the miniature Salmo snaffled by an athletic bar of silver a few casts on as the trout seemed to get on the feed. They were hitting the lures around 2feet below the surface – trout can be very depth specific, miss your mark by a foot either side and you could think there’s nothing there, making this a very systematic form of lure fishing.

We stayed in the same area, fishing the same drift to find more fish, which we did. But then the inevitable happed. Coming up to midday the cloud dissolved away and the beating heat sent the fish to the depths. We moved to deeper water in the centre of the reservoir, targeting them with appropriate lures – small vibe baits and soft plastics - but with no luck, those slimy buggers were having none of it. Baked and bruised we called it a day around half two. Job done with the old man already talking about going again – by far the best result of the day.