The enormity of the lake was masked by swirls of mist as the first drops of rain started to fall. It was uncharacteristically cold for May, but as the boat settled itself on the crystal-clear water that was the last thing on our minds.

Straddling the border between France and Switzerland, Lake Geneva covers a massive 224 square miles, it stretches 45miles in length and is up to 8.7miles wide with a maximum depth of 1020 feet. Those are some big figures. 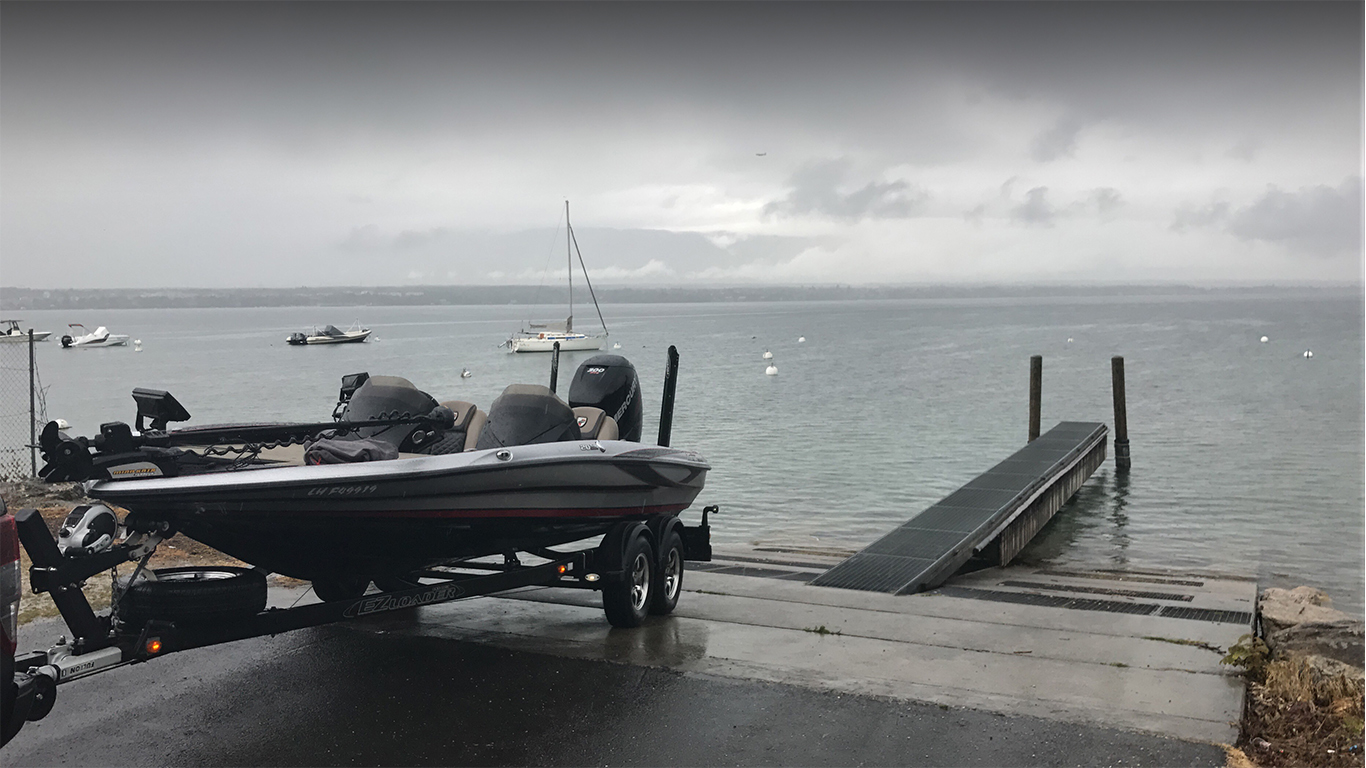 The bottom line? This is a giant of a water, with the grandeur of the scenery more than matching the hard stats. It’s also home to giants. Pike here grow big. Thirties, forties, and beyond swim in these waters, but you have to know what you’re doing to be able to catch them.

Rage Brand Manager Sylvain Legendre is one of the pioneers of lure fishing for the giant esox on Geneva, meaning there are few better anglers to fish the lake with. And that is exactly what we’re planning to do.

With rods and lures loaded, fish finders in position and engine fired up we’re soon smashing across the surface in Sylvain’s high-powered boat. The last few degrees of warmth blasted away from our head and bodies by the time we arrive at the first spot.

The pike here spawn typical around mid to late April and Sylvain’s plan is to first find out if they’re still in the shallows. Lake Geneva tends to have large, shallow, mariginal shelves covered in weed which push out into the lake before plunging off to serious depths. Come spawning time the pike will be in and around the weed in these shallows, however after three quarters of an hour firing out Salmo Sliders we haven’t had a touch, giving us the clear signal that the pike have obviously moved on.

No worries, Sylvain knows this area of the lake intimately – it’s far too big to fish the whole of the mighty Geneva in a day, it needs to be broken down into more manageable sections – and we move on.

The plan now is to target the drop-offs. The Geneva pike love to hug the steep sides as the bottom of the lake plunges from the shallows into the deep, use the depth change to lurk in waiting to ambush prey fish as they move above. 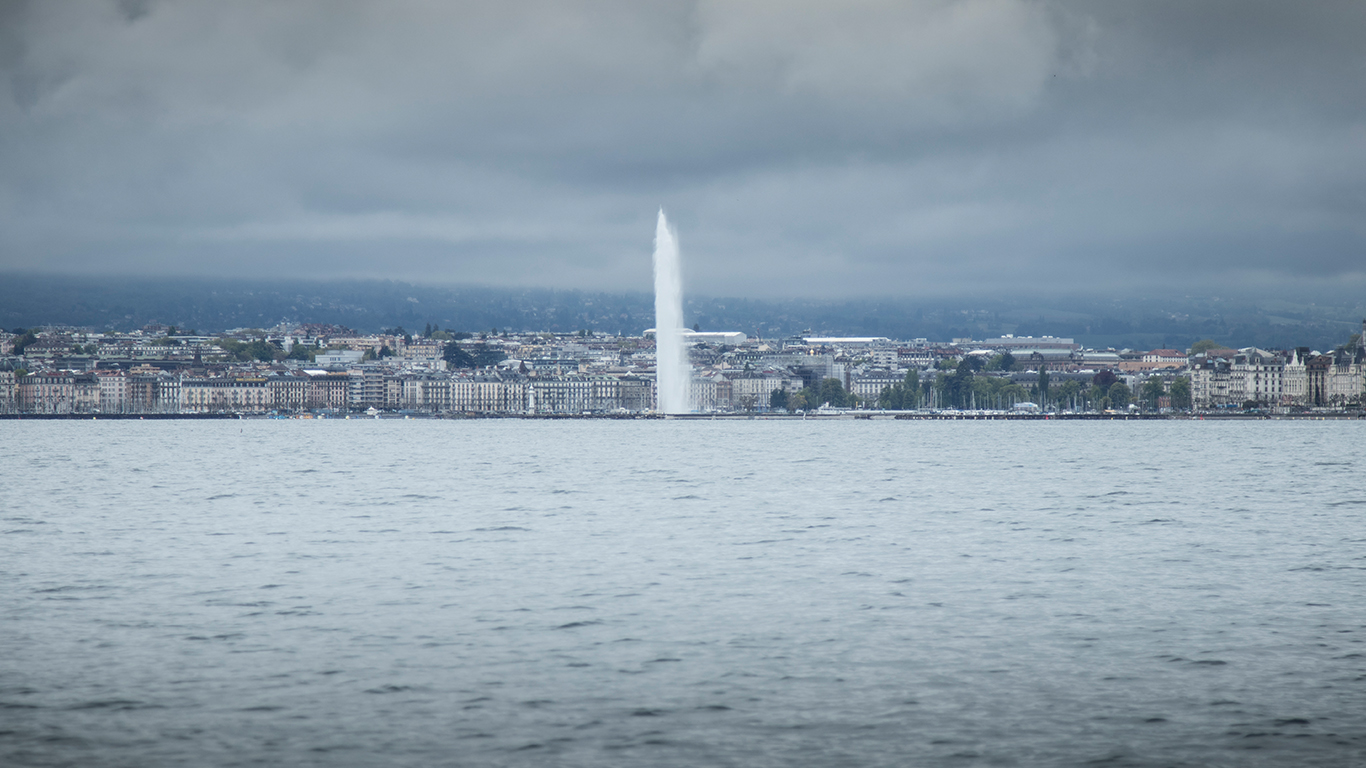 Using an electric motor, Sylvain guides us along the undulating, underwater precipice as we fire out our chosen weapons for the session. There’s no point messing around here, so we’re loaded with 18cm Replicant Wobbles and 18cm Pro Shads loaded on corkscrew bullet jig heads with double stingers for hooking.

The water here is absolutely crystal clear, which for the lure angler is good – it’s such a visual approach that you want them to be able to see everything – but it also presents specific problems, in that the pike can see much more of our plastic-based fakery than we might actually want them to. Because of the clarity we go for more natural colours on the lures: pike, perch and silver bleak in the Pro Shads imitate the prey fish the closest, while we bank on the natural perch, roach and stickleback in the Replicants.

It’s not just the lure colour that has to be thought about. Pike hit fish from below and behind, and Sylvain believes in hiding everything he can from them that might give the fish a clue that the meal they think they’re about to have has strings attached. Because of this he doesn’t use a wire trace, instead opting for 80lb fluorocarbon. At this point there will be some anglers foaming at the mouth and bashing out messages on forums about this, but, as Sylvain explains (and this guy has caught more big pike across Europe than most of us have clipped on lures) he never loses fish because of this.

Using a fluorocarbon trace means the lure doesn’t have an obvious line protruding from its front end while it’s worked in the clear water. Further to this, Sylvain then adds around 15feet of lower diameter fluoro leader in front of the trace to mask that too. The end result is a lure worked on an extremely low visibility front end set-up. 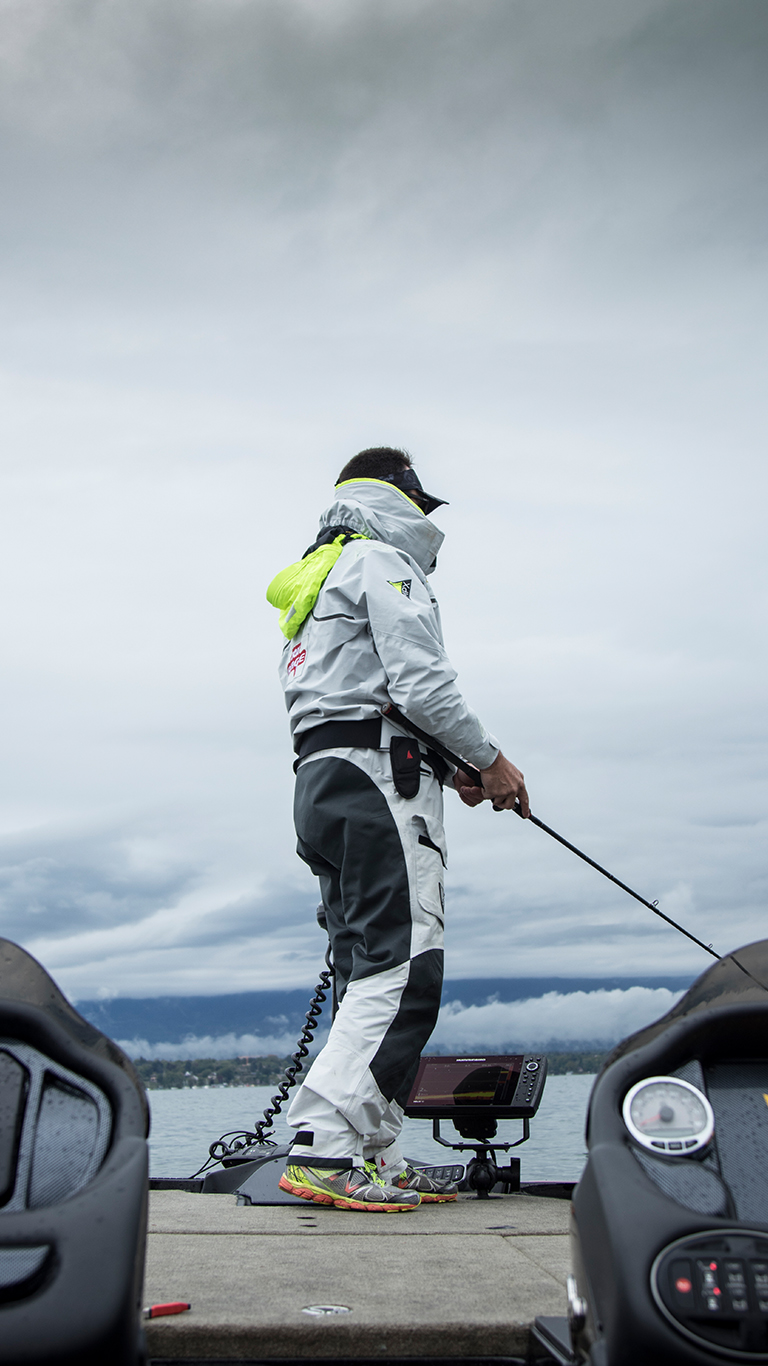 It’s still cold as we keep working the drop-offs. And, unfortunately, it’s been that way for a good week now. Snowfall on the mountains around the lake that’s melted into the water has also dropped the water temperature and that is making things very hard going.

Keeping a tight eye on his fish finder Sylvain watches for prey fish shoals – where they are the pike are more than likely to be. We come across great clouds of perch knitted tightly together in 20meters plus of water – they are not anywhere to be seen above that depth, showing temperature is a big issue today. Just to get a ‘tug’ we even drop a small jig on a light rod down to these perch, but with what looks like thousands packed together we only get two very small stripies, and even they didn’t seem convinced they should have been feeding.

Sylvain’s happy though. He’s using today’s fishing as an opportunity to test a couple of new heavy-weight casting rods that will be coming out later this year as part of a new Rage range and is very impressed with their performance. He just needs a fish!

We don’t give up, and after several hours of casting, retrieving, moving and repeating, third cast from the end of the day on a drift through a small bay the silence is shattered.

Just a few meters from the boat Sylvain’s Replicant is engulfed, the unseen predator smashing and grabbing as it bolts away from the boat. The rod on test arcs round while Sylvain gains control and plays the fish into reach. Looking to chin the fish out of the water our man changes his mind as the lure is inside the pike’s mouth and he can’t see where the hooks are – the last thing you want is one hook in your finger and the other attached to an angry pike. The net’s used and the fish is bought on board, unhooked and held up for the cameras before being slipped back. 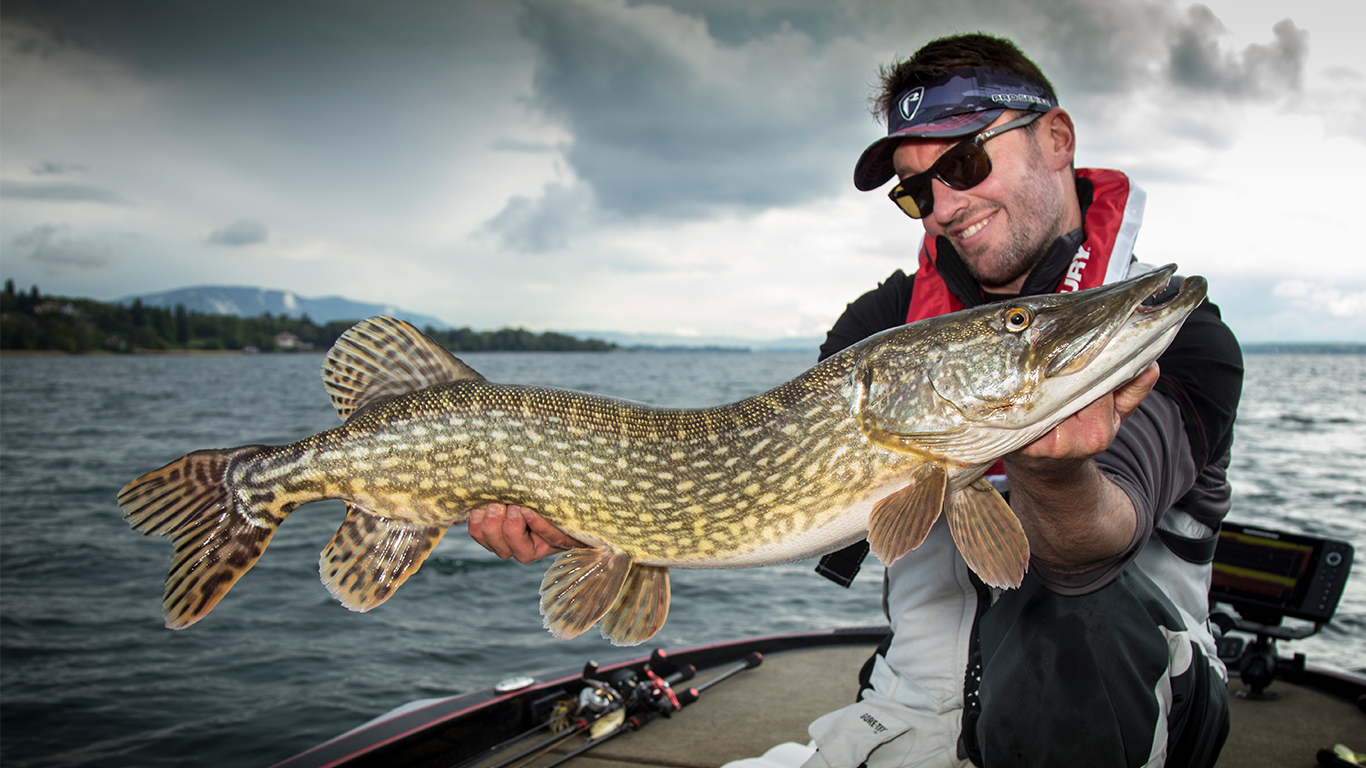 All in all you could say it was a bad day, but after putting in the effort and not giving up, that one pike felt like a victory. And with a backdrop as stunning as this, it’s always a great day’s fishing. 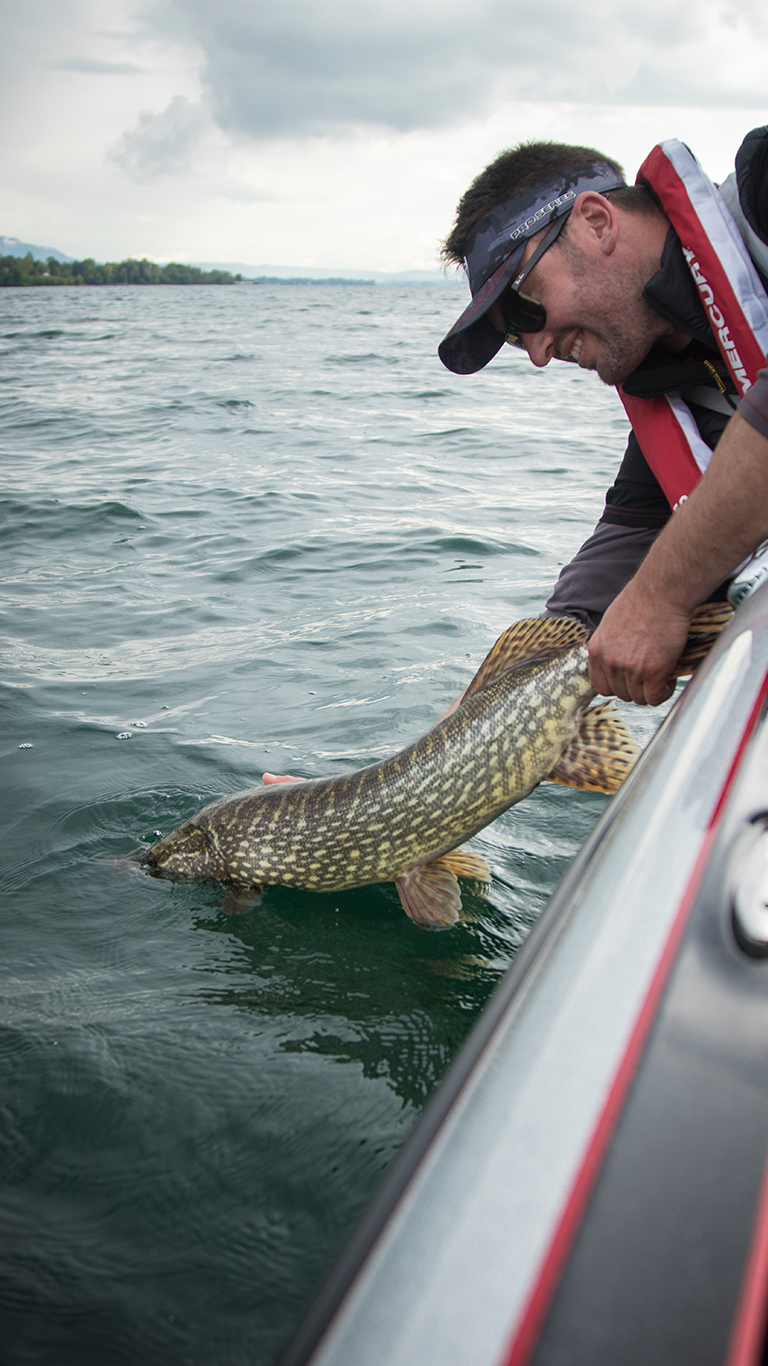