A DAY ON THE DIEP 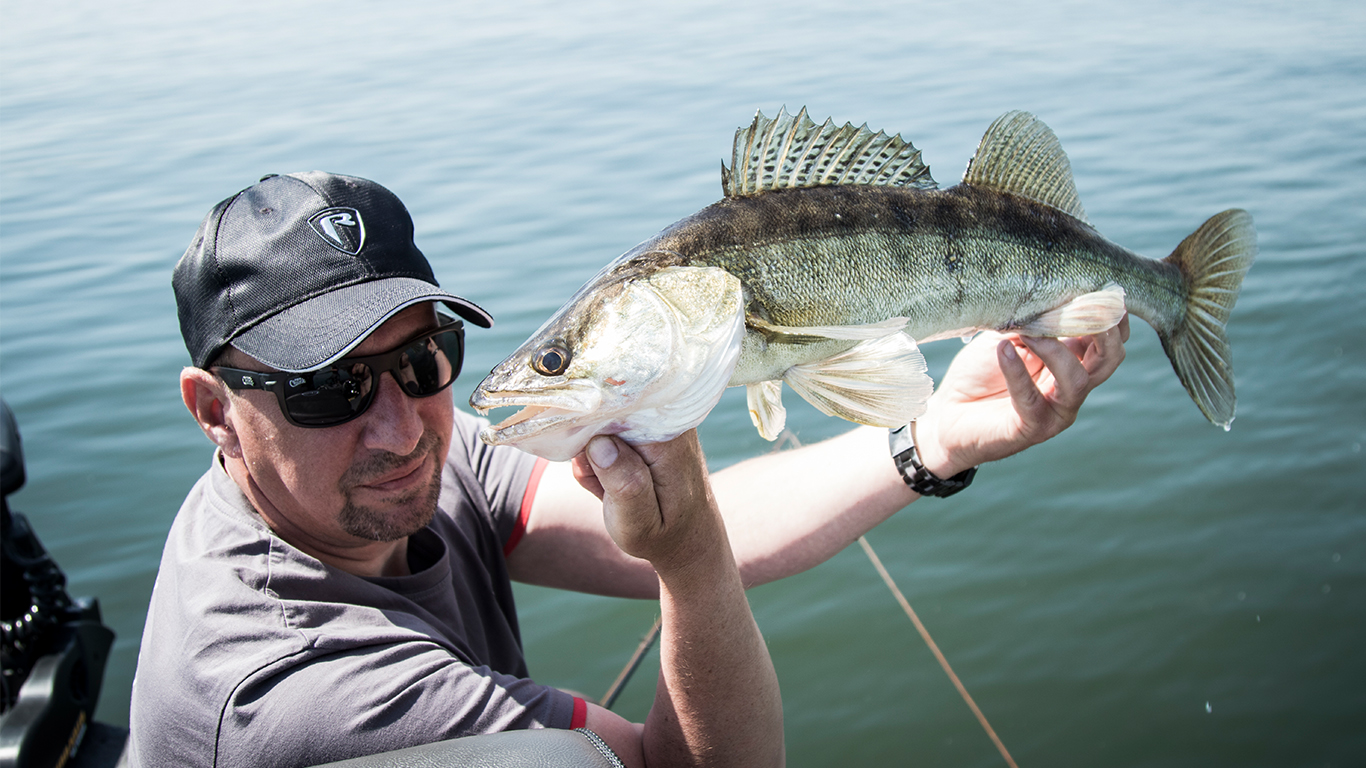 As the boat entered the water, sliding with ease off the large trailer, you could tell everyone was excited. Hollands Diep, part of the Meuse River in the Netherlands is alive with fish and as a result the large body of water is home to an impressive number of predators.

Pike, zander, perch and asp all swim in its clear depths, chowing down on vast shoals of prey fish – this really is a mecca for lure anglers.

Our pilgrimage out on the hallowed Holland water is with Belgian lure ace Jean-Marc Brison (JMB to his friends). A hot shot competition angler and Hollands Diep regular, JMB knows this place like the back of his hand and is here for a bit of preparation for the up-coming Predator Tour tournament. This man is the perfect guy to be on this water with, especially in the comfort of his powerful Lund boat – the largest of its kind in the Benelux region we’re reliably informed.

Having said that, even the might JMB can’t control the weather, and with the air, and more importantly the water temperature, already relatively high before the sun’s fully above the horizon, the conditions are not looking in our favour. 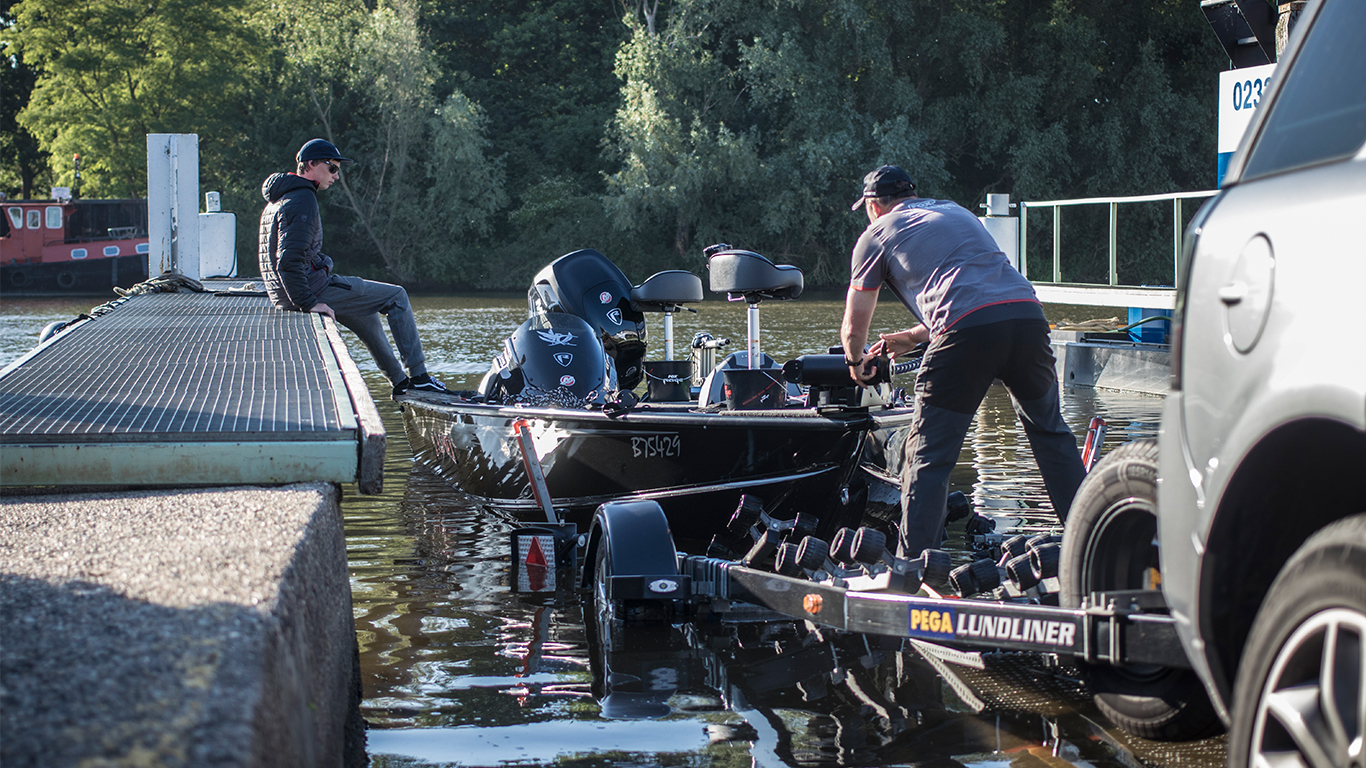 Smashing over the glass-like surface we’re soon in position for our first casts of the day - we being JMB, Rage Media Co-ordinator for the Benelux Region Hugo Van Gelder and Rage Media Manager Steve Phillips. Pike are the target, with JMB positioning us in the middle of a bay near large weed beds where he believes the predators will be lurking. 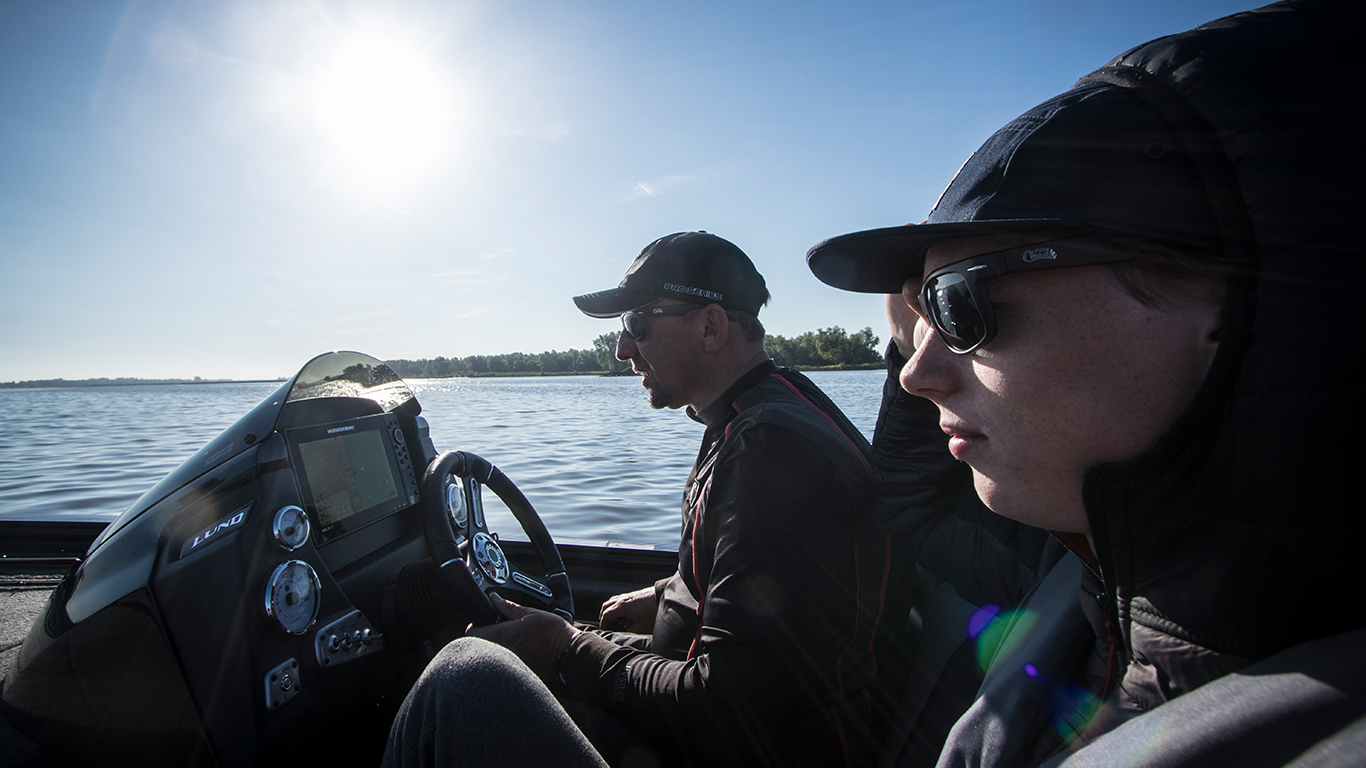 JMB has a soft spot for Pro Shad 2s and it’s no surprise he reaches for one from the off. Rigged on a range of light jig heads – ranging from 5gram up to around 20gram giving him options in terms of depths and working speeds – JMB also adds stingers. These are tied up on flexible wire with Jean-Marc preferring to attach them to the underside of the lure as their weight works as a keel, keeping the lure upright. If there is weed however and he wants to work his lure close to it, the stinger will be mounted to the top to give him a chance of not picking strands up.

Cast out on his Terminator rod, the 14cm Pro Shad is worked fast over the weed, paused momentarily for a quick drop that fish can hit before the retrieve is continued. The first spot delivers nothing other than two foul-hooked bream for Steve – the species are spawning in big numbers here - so we move on.

The next location is at the mouth of an inlet. The water here is coloured thanks to rain over the last few days, a factor that sees JMB make just a handful of casts before moving us on downstream. There’s clearer water here as we drift along the margin under the power of the boat’s electric motor. Casting at the weed again sees JMB into a fish on the second cast. Not the pike we’re after, but a feisty zander that absolutely smashes the Silver Bleak coloured lure.

In the same spot, Steve – who has downsized to a 10cm Zander Pro Shad to try and tempt zander on to his line sees his lure engulfed just a couple of feet from the boat by a good-sized pike. The fish came from nowhere, and after a hard but short run it leaps from the water and throws the small lure just as the net is being readied. Gutted is not the word.

Another move and another fish, this time it’s Hugo’s rod that’s bent over as a fat pike takes a liking to a new lure being tested (a very exciting version of an existing lure that you’ll find out about very soon). Using a powerful Terminator Pro Swim Bait Special casting rod Hugo plays it out and guides it into the waiting net before holding it up for a shot before it goes back, strong and none the worse for wear.

So far it’s going well, the fish are biting and were covering lots of water. But then all of a sudden we hit a wall. For the next few hours we don’t get a sniff of a bite. The hot, still, bright conditions have killed the fishing dead. JMB takes us over deeper water to look for zander, but even after finding some big looking specimens on the sounder they pay no attention to our vertical efforts.

Undeterred we fish on, and it’s that man JMB who works out what’s needed. A Pro Shad 2 in midnight shiner, rigged on 5grams of lead and worked fast in the top half of the water seems to be the key, with Jean-Marc winkling out another five zander and a few jacks – nothing massive but still satisfying to see in such hard conditions. 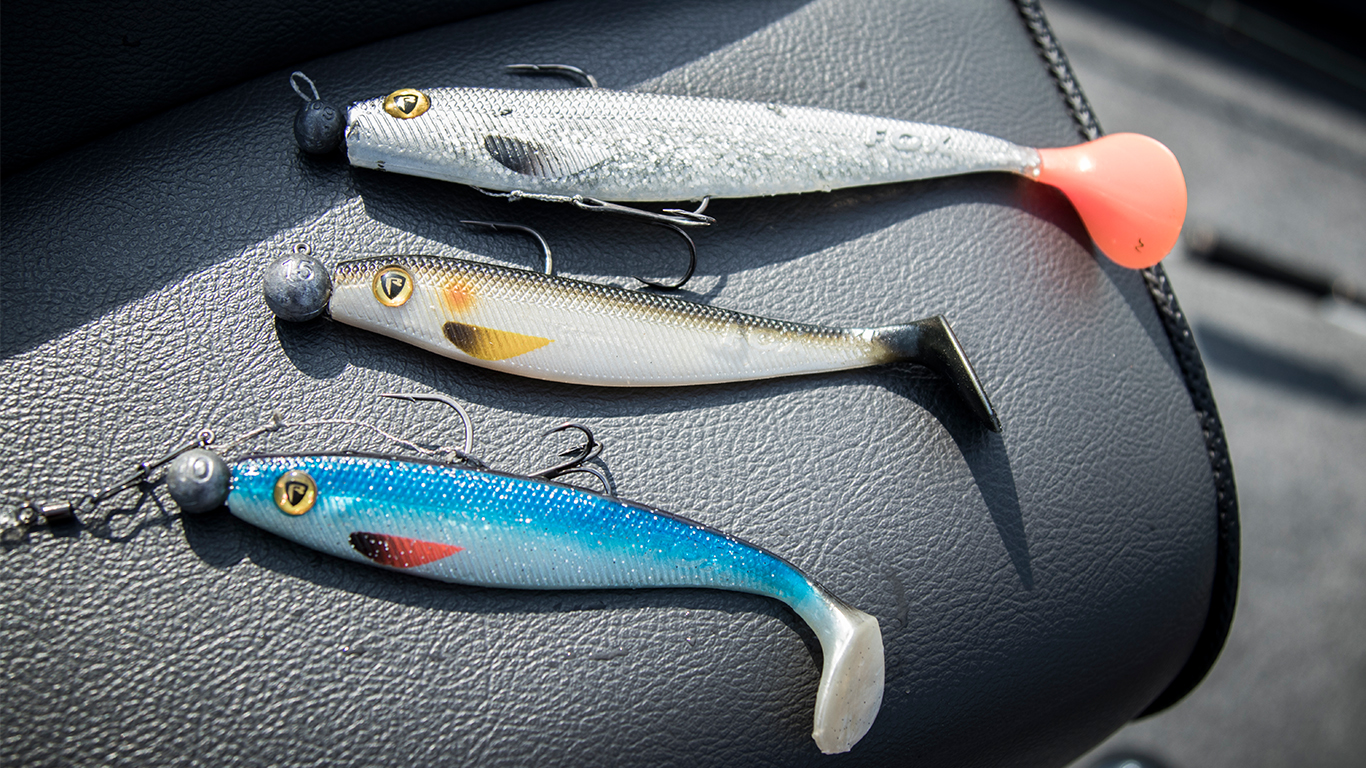 The standout moment from the afternoon though was a follow. JB had just lifted his shad from the water when we all saw the flaring of gills and the forward lunge of a pike that looked absolutely monstrous. It was one of those moments where everything slows, apart from for JMB who was kicking himself he hadn’t left the lure in the water just a second longer because this fish definitely wanted it. 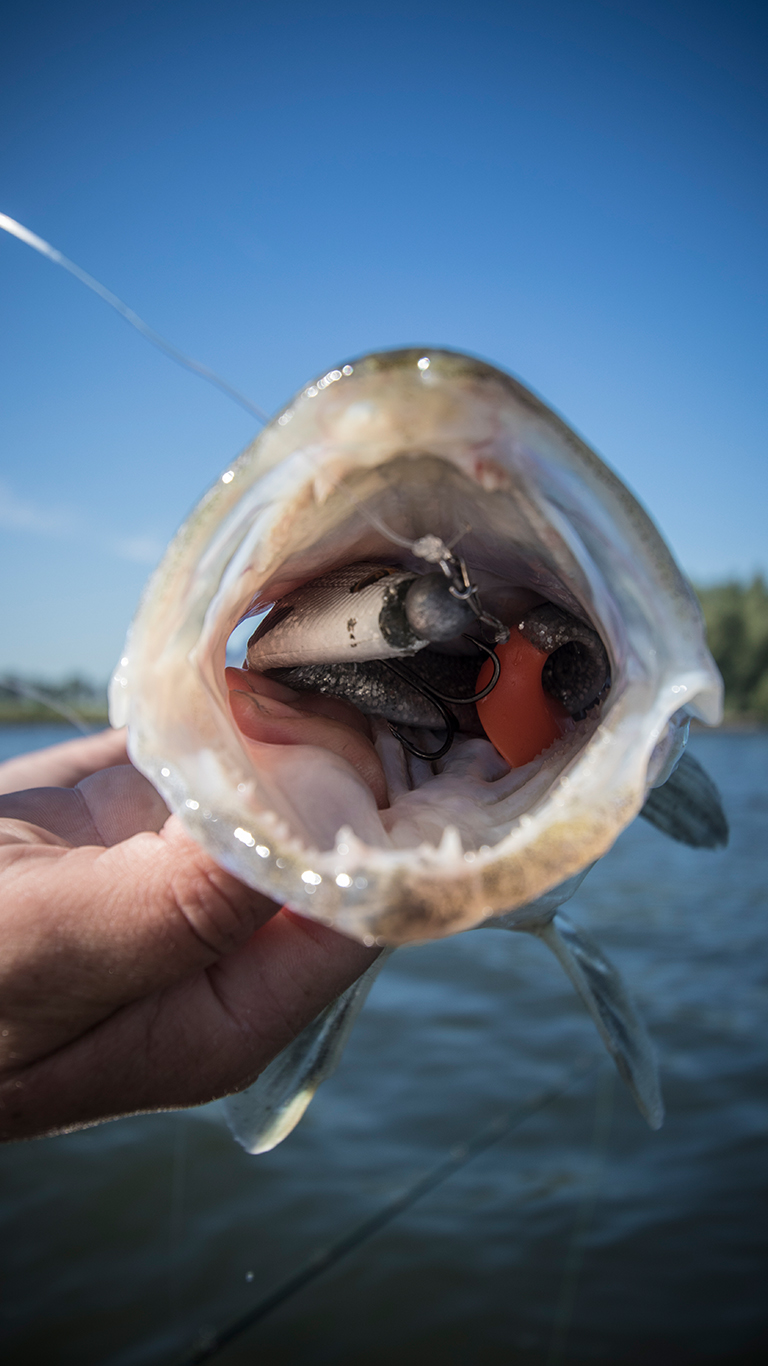 After the near-miss we moved around some more with JMB employing his tactics to outwit a couple more zander while the Hugo and Steve targeted pike (well you would, after seeing something with the dimensions of a medium-sized submarine swimming near to your feet) but with no success.

Sunburned, slightly dehydrated but still hugely inspired by the place we set off back for the slipway, confident wed worked hard in the conditions but with luck playing a cruel game with us. Hollands Diep, you have our respect.